What Plans are Coming for San Tan’s Empty Retail Spaces? 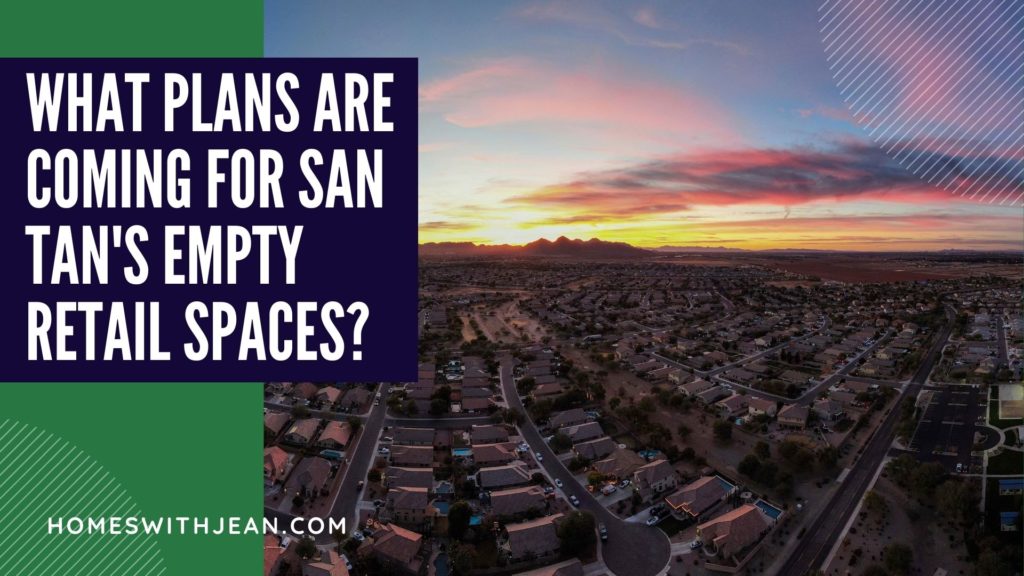 There are many empty retail spaces you may have noticed around the town of San Tan Valley. And some people are wondering if there are any plans for these empty shells of former retail stores. There are several people with many ideas of what the spaces need to become to be successful in the San Tan Valley.

What Plans are Coming for San Tan’s Empty Retail Spaces?

One area resident that owns a large number of retail centers around San Tan Valley is Michael Pollack. Michael has been suggesting to the city that the property on Alma School and Warner Road intersection, that was the former Fry’s grocery store at the northeast corner, become something other than a grocery store due to the Walmart right next door.

The Fry’s grocery chain took over the location after Kroger bought the Smiths Store in 2004 even though Fry’s had a very successful store located just a mile down the road at the intersection of Alma School and Elliott roads. There was a time when the intersection at Alma and Warner had a third supermarket called Smitty’s across the street from both the Fry’s and the Walmart. Pollack says that what San Tan Valley needs is to create more space for shoppers to come in and not bring in more shops to the town of San Tan Valley.

There has been a lot of retail growth in the nearby town of Chandler due to the large transportation line shift of the 101 focusing much of its service to the town of Chandler. As the Price Rd., Loop 101 opened in Chandler there was much more interest of purchasing retail space by store owners in the area as it brought more traffic and more attention. As more retailers moved into the 101 area (and some negative impact from the recent pandemic) this has left a few empty retail spaces in San Tan Valley. With these empty spaces city officials are looking for alternatives to retail to keep the business areas of San Tan Valley thriving.

Some examples of success with this school of thought include how the old Smitty’s Grocery Store was turned into the Great Hearts Academy. Another example is the multi-family housing complex on the lot next to the Home Depot on Chandler Boulevard that used to be home to the Krispy Kreme. Yet another successful example is the new MOX Boarding House that will be open in January at the corner of Alma School and Knox Rd. that was previously home to the Iguana Macks and Social Box restaurants. MOX Boarding House is a Seattle restaurant concept offering food and drinks with board games that are available for purchase or use inside the restaurant. South of this site the Dos Gringos restaurant will be converted into a medical center.

City officials have begun to look into the future of what they could do to proactively take big-box retail spaces and re-purpose them to more successful uses. Finding a use for the former Fry’s store space at Alma School and Warner is a high priority of city officials, but there is a lot of limitation options with it being right next to the Walmart.

Resident Michael Pollack is suggesting that this area be turned into more housing bringing more residents into the area. This will bring more shoppers to the unique and fun small business shops that rent out space in the nearby retail centers that surround the old Fry’s market.

For more information on living in San Tan Valley, including San Tan valley real estate, please contact me any time.