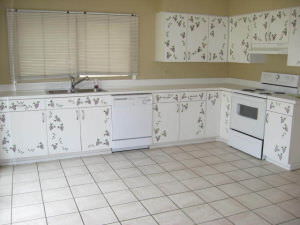 During the third quarter, 1,147 Valley houses were sold for a profit by Phenix house flippers who had purchased them less than nine months before, according to the latest data from real estate research firm RealtyTrac. That volume ranks Phoenix No. 3 for the total number of home flips by Phoenix house flippers.

Fewer foreclosures and higher home prices in the Phoenix area have meant fewer flips by Phoenix house flippers . During 2012 as the region’s housing market began to recover, there were as many as 2,000 houses flipped a month.

Many of the houses being flipped for a profit now are not foreclosures, but older houses in popular Valley neighborhoods. So Phoenix house flippers are changing their focus to maximize their profit. Take this photo above…..a modern kitchen will make this home desirable.

“The most successful Phoenix house flippers are buying older, outdated homes in established neighborhoods and rehabbing them extensively to appeal to modern tastes,” said Daren Blomquist, vice president at RealtyTrac.

Nationally, investors made a profit of $75,990 per flip during the third quarter, reports RealtyTrac.

SPECIAL FEATURE: Each weekday afternoon, look for “Reagor on Real Estate” — the one bit of Arizona real estate news you need to know today.