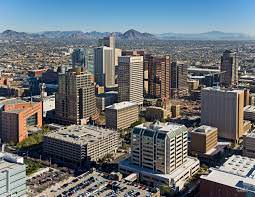 Phoenix came in sixth behind only Austin, San Antonio, Raleigh, Dallas and Orlando.

“Phoenix has a strong outlook and relatively reasonable prices,” he said.

He said the one challenge that could face the Valley’s real estate market is whether new construction will grab new tenants and users from out of state or just local companies relocating within Maricopa County.

Three of the top five markets for real estate are in Texas, according Situs.

Velky said Austin with its growing technology sector was by far and away the top market for real estate growth and investment.

Toledo and Cleveland, Ohio ranked last in the survey. Las Vegas came in 11th and Los Angeles 43rd on the report.

Velky said some L.A. submarkets such as Santa Monica are strong but high prices and under-performing areas such as downtown bring down the market.