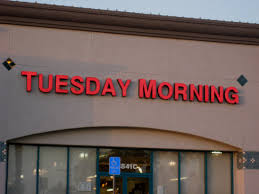 Upscale discount retailer Tuesday Morning is opening a distribution center in southwest Phoenix that is expected to create 300 new jobs. I love new jobs in the Phoenix area.  Every additional job adds to the upward spiral.

In one of the biggest Valley lease deals since 2011, the Dallas-based company is renting 593,600 square feet of space near 67th Avenue and Buckeye Road from Liberty Property Trust.

“Our new Phoenix facility will serve our stores in the western United States,” Douglas Sullivan, senior vice president of real estate for Tuesday Morning, said in a statement about the deal. “This is an important step in the building of our overall supply chain strategy.”

Tuesday Morning has 10 stores in Arizona and almost 800 U.S. locations.  Tuesday Morning signed a lease for ten years with Liberty Property Trust for the space.

Don MacWilliam, Payson MacWilliam and Tom Woods of Colliers International worked with Tuesday Morning on the Phoenix deal. Marc Hertzberg and Tony Lydon of JLL represented Liberty in the transaction.

Liberty now owns more than 750 properties with 105 million square feet of space across the United States.

All that said….do you shop at Tuesday Morning? Check it out.  TUESDAY MORNING