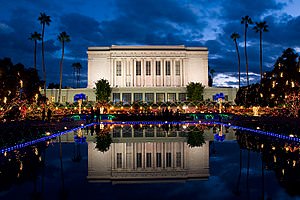 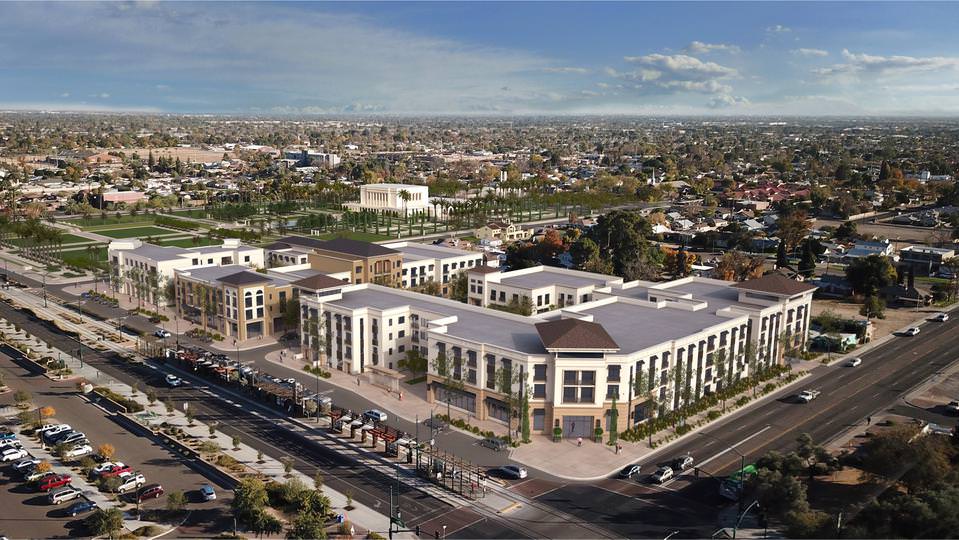 Plans have been announced to redevelop 4.5 acres of land near the Mesa Arizona Temple. This rendering offers a southeast view of the mixed-use community.

Renovation plans for the adjacent Mesa Temple block call for demolishing and relocating the temple’s Visitors Center. A new 18,000-square-foot Visitors Center and Family History Discovery Center will be built on the corner of Main and LeSueur as part of CCRI’s project.

Plans also feature 1.6 acres of open space on the Temple grounds, historically used for the Easter Pageant and the Christmas lights show.

“We’ve been planning this project for years,” said Matt Baldwin, real estate development director for City Creek Reserve, an investment affiliate of the Church. “We’ve talked with city and county government leaders, city planning staff, and other local developers. We want to enhance and beautify this block, but we also want to make sure what we’re proposing is what downtown Mesa needs.” 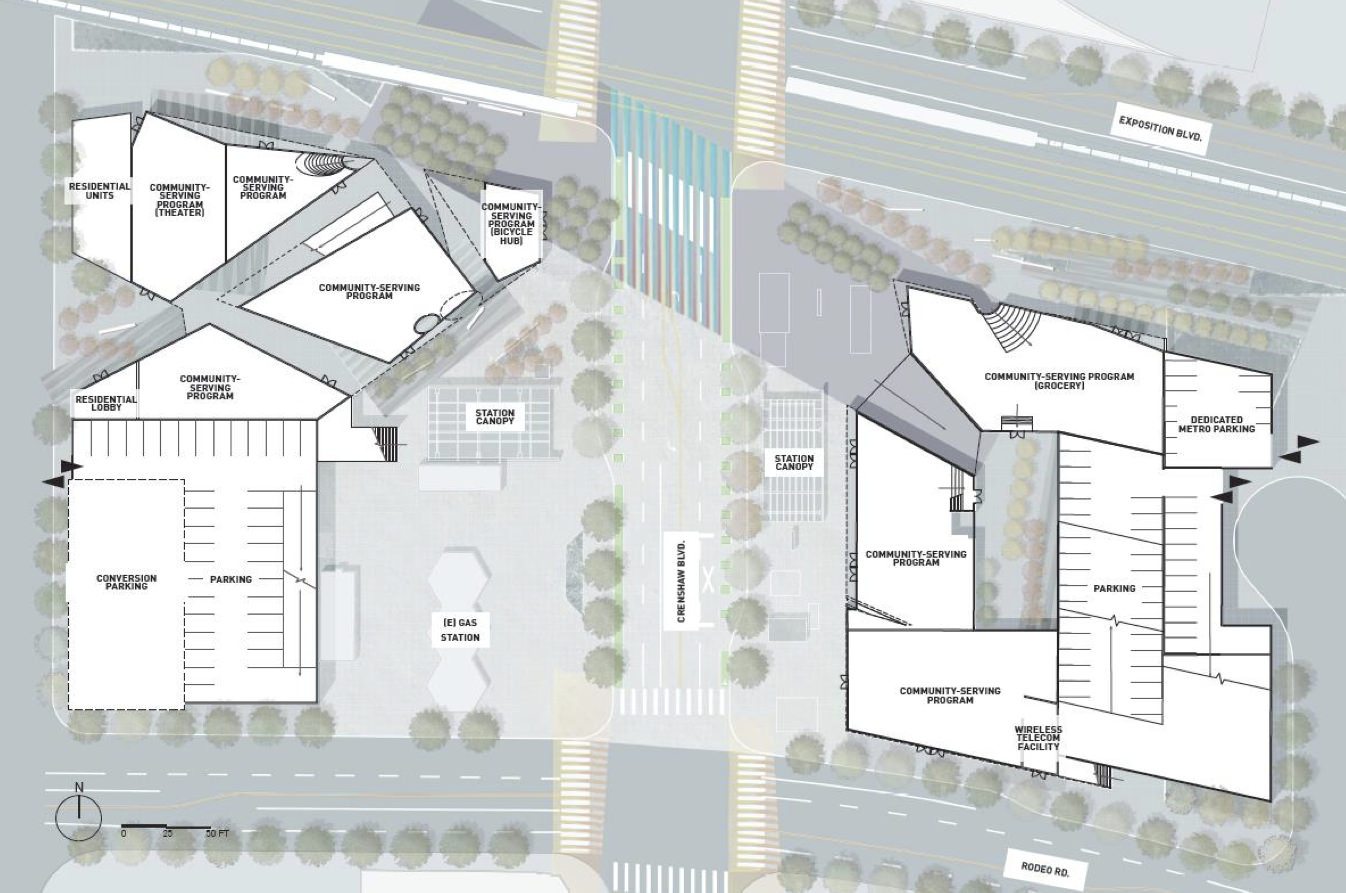 Even historic preservation advocates realize they are unlikely to block the massive redevelopment plan unveiled this week surrounding the temple, the venerable cornerstone of Mesa since its opening in 1927.

The plan would require demolition or relocation of seven small homes dating to the 1940s – which some preservationists say would potentially endanger the existence of the Temple Historic District by changing its character.

Baldwin said he views removal of seven of the 61 homes in the district as consistent with the delicate balance between the competing interests of redevelopment in downtown Mesa and historic preservation.

Baldwin and his partner, Carl Duke, offered to donate the houses, along with the $5,000 to $10,000 per house demolition cost, to anyone willing to move them to an undesignated site.

What Baldwin won’t do is pay the estimated $70,000 to $80,000 cost per house for moving them, providing that they are in good enough shape to survive such a process.

Baldwin’s offer is not available for long. City Creek wants to begin construction on the massive redevelopment project in September, after waiting out a 180-day moratorium on demolition that began when Mesa refused to approve three demolition permits.

Greg Marek, Mesa’s former historic preservation officer and a member of the Historic Preservation Board, said that either way, the houses will be removed as City Creek Reserve prepares to execute its plan, using its rights as a property owner.

“It’s a steamroller coming down the street,” Marek said. “In the end, they will build what they want to build.”

Marek predicted that the required zoning change easily would win approval from the City Council. The zoning proposal goes before the Planning and Zoning Board on June 20. Historic preservationists are mounting a campaign to oppose the zoning change and to protest the plan at the meeting.

Marek still wants to save the houses, but he said it would be difficult to build such a large redevelopment plan without removing them. He plans to question Carl Duke, vice president of City Creek Reserve, when he appears before the board on Tuesday to outline his plan.

David Davis, another City Creek Reserve official, said the redevelopment project extends about 330 feet south of Main Street and covers about 4½ acres. He said the tallest buildings would be closest to Main Street and Mesa Drive, and that the plan becomes less intensive as it reaches other houses in the historic district and the temple.

Baldwin said one problem with the houses that are planned for demolition is that the parking garage runs beneath most of the project, making it difficult to build in phases.

He said one priority is to have the new Visitors Center open at about the same time as the renovated Temple in about two years. A fact sheet distributed by City Creek outlines an ambitious construction timeline.

Excavation would begin in September, parking-garage construction would start in October and completion is anticipated in 24 to 30 months, in late 2020 or early 2021.

“We think this is a good balance,” Baldwin said, with removal of seven of the 61 homes in the historic district, while building a project that will upgrade downtown Mesa.

He said First Avenue, originally a boulevard leading into the temple when it first opened, also will be restored. Several bungalow-style houses dating to the 1920s are on First Avenue.

Duke said light rail is both a bonus and a complication. While it presents an opportunity to improve access to and visibility of the temple, he said a residential development with small houses and large lots no longer fits there. 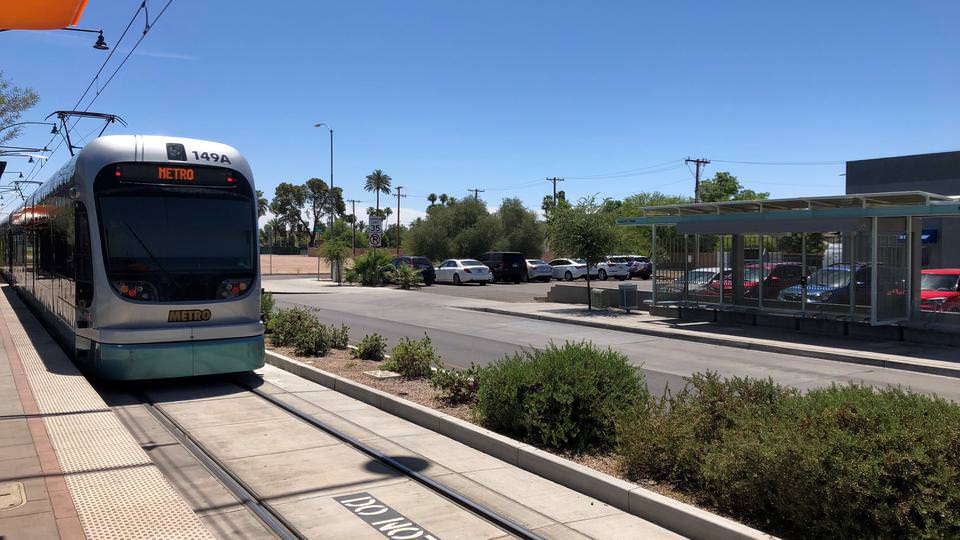 The goal is to have riders walk less than a quarter-mile.

While the present neighborhood might be a good example of Mesa’s suburbanization, “it’s the opposite of what you want in immediate proximity to transit,” Duke said.

He said City Creek is interested in preserving properties within the district, but not in the path of the redevelopment plan.

“We are trying to find a balance between conflicting interests,” Duke said. “We are not turning our back on historic preservation.”

But Vic Linoff, a historic preservationist, said there are plenty of empty spaces in downtown Mesa that could be used to increase density without sacrificing a historic district.

“It sounds like these plans are firmly set and there is little room to negotiate,” Linoff said, even though that is the purpose behind the moratorium on demolition. “You are not going to move seven homes in a couple of months.”

He said many of Mesa’s historic districts are located within walking distance of the light rail.

“I would disagree with their essential premise, arguing that a historic district is no longer consistent with community standards,” he said. “This could be interpreted in a way that makes every historic district vulnerable.”

Kathryn Leonard, Arizona’s preservation officer, said she would need to analyze the project more thoroughly to determine if there is a threat to the Temple District’s survival.

“I wouldn’t say there is an imminent threat of delisting,” she said. “There certainly is a loss of integrity.”

She said no historic districts have lost their designation in Arizona but it could happen if the demolition is so extensive that the district losses its character.

Moving houses is never encouraged, because it destroys the “integrity of location and setting,” but a move can be a last-ditch effort to save a building from demolition, Leonard said.

“We understand there are some competing interests sometimes,” she said. “It’s sad to see our heritage go away.”