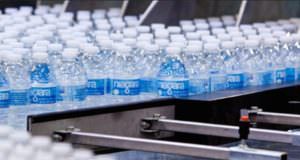 What is that huge building on Elliot near 96th?  Niagara Bottling, LLC is building a 450,000 Square foot plant.

City leaders hope to attract a mix of manufacturing facilities to the area, which already is home to an Apple Data Center.

Niagara Bottling, LLC, the largest, private-label bottled water supplier in the U.S., announced it will establish a 450,000-square-foot, highly automated manufacturing and bottling operation in the City of Mesa’s Elliot Road Technology Corridor.

“The investment that Niagara Bottling is making in Mesa is a very significant one and I could not be happier that they have chosen to make it in District 6,” District 6 Councilmember Kevin Thompson said. “The Elliot Road Technology Corridor is such an important area for our region and they will be a tremendous addition.”

Niagara Bottling will invest $76 million in the facility and will create 45 to 55 new jobs with a total payroll of more than $2.5 million annually. The company expects to begin construction in June this year and commence production in the first quarter of 2018.

“Niagara Bottling, LLC is a responsible family-owned company that is committed to supporting our local community, our team members and our environment. We are very proud to announce Mesa, Arizona as the home of our newest beverage manufacturing facility and look forward to maintaining leadership in the areas of innovation, supply chain efficiencies, and overall environmental stewardship,” Brian Hess, Executive Vice President at Niagara, said. “We are very proud of our efforts to provide healthy beverages to our customers, first responders, and charitable partners.” Hess further commented, “We are very appreciative for the City of Mesa’s support and warm welcome and look forward to being an integral and productive member of the local community.”

Niagara Bottling supplies major retailers across the nation. Headquartered in Ontario, California, the company began as a family business in 1963 by offering five-gallon containers for home and office delivery. Niagara expanded in the early 1990s to offer single-serve private label bottled water for grocery, club, convenience, and wholesale customers and has established itself as a national leader in high-quality, affordable bottled water.

“Niagara is the latest in a string of manufacturing firms selecting Arizona, joining a thriving industry that provided more than $24 billion to our state’s economy in 2016,” Sandra Watson, President and CEO of the Arizona Commerce Authority, said. “We applaud Niagara’s commitment to 100 percent of its bottles and caps being recyclable and we thank them for their commitment to and investment in Arizona.”

“The new Niagara Bottling manufacturing facility in Mesa will add quality jobs and tens of millions of dollars in capital investment in our communities,” Chris Camacho, President and CEO of the Greater Phoenix Economic Council, said. “We join our partners in welcoming Niagara to Mesa, Arizona, and look forward to their future success.”