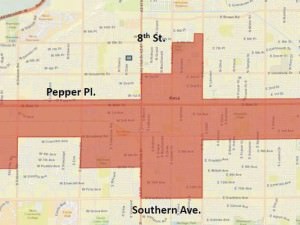 Mesa is competing for a relatively new national designation that could give parts of the city’s struggling west side an edge when vying for federal dollars.

Mesa is one of 97 urban applicants in the second round of the competition, which is expected to designate six urban zones, plus at least one rural zone and at least one tribal zone.

The 10-year classification itself does not provide those selected with federal cash. Instead, it equips designees with additional resources, expertise and technical support as they navigate federal programs to compete for those dollars. Federal officials also give Promise Zones explicit preference when reviewing grant applications.

“(The designation) is not for our most impoverished communities across the country, but those who (also) have a viable strategy” for economic development and advancement, Mesa Economic Development Director Bill Jabjiniak told the City Council in February.

Mesa’s proposed Promise Zone would stretch, roughly, from the city’s western boundary to Gilbert Road and from Pepper Place to Broadway Road. Additional neighborhoods to the north and south also have been included.

Vice Mayor Dennis Kavanaugh said he was “pretty intrigued about the potential if we get a designation such as this basically along the light rail route.”

The Mesa Police Department is exploring the possibility of implementing a bike-patrol team to reduce crime along the light rail line and in surrounding neighborhoods, he said, and the designation could put the city in a better position to apply for grants aimed at addressing criminal activity.

Dea Montague, a retired attorney and longtime Mesa resident who advocates for west Mesa neighborhood groups, had mixed feelings about the city’s application.

“If it will help us direct efforts on improving our area by eliminating and solving problem features, that would be good,” Montague said. “However, if it means that low-income tax credit housing applications will have to be limited to this area by giving us a preference in such applications because of the Promise Zone designation, then I am against it.”

The list of programs for which Mesa’s Promise Zone would have preference could evolve over the years alongside Congress, according to the city.

“We know what agencies are giving preferential treatment right now,” said Sharon Skinner, Mesa’s grant coordinator. “Our hope is that not only will we get preferential treatment from those agencies, but just by talking about the need in our Promise Zone, we should be able to make a stronger case to any other agencies in our applications.”

Phoenix and Tucson have submitted applications as well, which could affect Mesa’s chances since federal officials are taking the zones’ geographic distribution into account.

“They may decide to only put one in Arizona, or one in the southwest for that matter,” Skinner said. “But…there aren’t a large number of southwest cities applying, so regionally, we are in a fairly small pool, which is good.”

Mesa expects to get an answer sometime this spring.

A look at how the Promise Zone compares to the city at large. Figures are based on the most recent county and national data available.

In his 2013 State of the Union address, President Obama announced that he would designate 20 Promise Zones nationwide: urban, rural, and tribal communities where the Administration would partner with local leaders to create jobs, increase economic activity, improve educational opportunities, and reduce violent crime. On January 9, 2014, the first urban, rural, and tribal Promise Zones were announced in a ceremony at the White House. They are located in: San Antonio, Los Angeles, Philadelphia, Southeastern Kentucky, and the Choctaw Nation of Oklahoma.

For communities selected, the federal government will partner to help the Promise Zones access the resources and expertise they need. To date, there are twelve federal agencies working in close collaboration to provide resources and expertise to urban, rural, and tribal Promise Zones to expand economic mobility and opportunity in their communities.

For the Second Round Promise Zones competition, there were 123 applications submitted: 97 urban applicants, 19 rural applicants, and 7 tribal applicants. In the Second Round, applications are being evaluated based, in part, on the quality and feasibility of identified community development projects. Each applicant was required to submit a survey detailing the project goals and activities that would form the foundation of their Promise Zone designation.

The Community Development Marketplace (CDM) is a database of the Second Round Promise Zones Initiative applicant project data from 111 communities (86 urban, 18 rural, and 7 tribal) who consented to share their goals and activities template with the public. The CDM provides information that describes community goals, the proposed activities expected to advance their goals, and the organizations involved in implementing and supporting these projects.

The CDM database created from this information does not reflect the totality of information submitted with each application, only a portion of the information that was included in the goals and activities template.

The purpose of the Community Development Marketplace is to allow communities to identify others who are working on similar issues, to help funders and social investors find potential investment opportunities, and assist other stakeholders in identifying potential partners. Using the following tool, the CDM can be quickly filtered by keywords to yield information on the lead applicant, geographic locations, community goals, proposed activities, implementation partners, and expected outcomes around a topic of interest.

This is an opportunity to create a community of peers and to share best practices around community revitalization efforts.  Data