Mesa Gateway Airport Growing or Not? 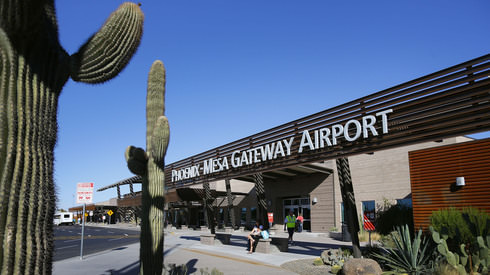 Is Mesa Gateway growing or slowing?
March has always been a historically busy month for travel and airports in the Phoenix-Mesa metro area. March 2015 proved to be exceptionally fruitful for Phoenix-Mesa Gateway Airport (PMGA),
as it saw 155,102 passengers, an increase of 2,139 passengers from March 2014. That is Mesa Gateway Airport growing.
June 2015, Elite Airways announced that it will begin offering service from PMGA to San Diego during the third quarter of 2015. Three weekly non-stop flights will utilize 70-seat CRJ-700 regional jet aircraft. Elite will bring 50 to 100 new jobs to the airport and plans to pursue new destinations such as Seattle, Vancouver, or Mexico.  That is Mesa Gateway Airport growing.

The East Valley airport’s board approved an incentive package worth more than $600,000 for Maine-based Elite Airways, which in turn will provide up to nine flights weekly to San Diego. Flights could begin in September and may cost $140 on average each way.

Airport incentives include waived landing and terminal fees, cash for marketing and “revenue guarantees” in which Gateway will compensate the airline for empty seats on flights that don’t generate enough passengers. The incentives expire after six months.

The airport was poised to offer Elite a similar deal for three weekly flights into Salt Lake City but backed away Tuesday morning after Allegiant protested what it considered “subsidized competition.” Allegiant serves Greater Salt Lake by flying into satellite airports in Provo and Ogden, Utah. That may be  Mesa Gateway Airport not growing.

Despite the airport’s apparent concession, Allegiant refused to back down Tuesday from its threat to leave Mesa and fly into Phoenix Sky Harbor International Airport instead.”It’s encouraging if they’re taking our concerns seriously,” said Brian Davis, vice president of marketing for Allegiant. “However, our issue goes deeper than any one point in the agreement.”

Davis cited a breakdown in trust and philosophical differences with airport administration among additional reasons for a potential move.

Allegiant began flights from Gateway, a former U.S. Air Force base, in October 2007 and has since served more than 6 million passengers in Mesa. The airport is run jointly by Mesa, Phoenix, Gilbert, Queen Creek, Apache Junction and the Gila River Indian Community.

Allegiant leaving Mesa Gateway would take about 243 pilot, flight attendant and maintenance crew jobs with it.  That would be bad for jobs in Mesa.  Gateway would also lose access to 34 cities Allegiant currently serves from Mesa, such as Bellingham, Wash.; Billings, Mont.; Sioux Falls, S.D. and Rockford, Ill. That would be sad.

Allegiant has itself received about $1.9 million in incentives from Gateway during its eight-year tenure, according to Michael Merk, the airport’s business-development director.

That has included landing-fee waivers similar to what Elite will receive but not the same revenue guarantee. Under that provision, Elite will be paid for each empty seat below 70 percent capacity on San Diego flights, up to $6,860 per departure.

Allegiant was especially upset that Gateway offered a revenue-guarantee subsidy for a route into Salt Lake City, which the airline considers part of its service network, Davis said.

The Las Vegas-based airline voiced those concerns earlier this year and asked to participate in a public discussion, Davis said. Airport executives then removed Salt Lake City from the public PowerPoint discussion but kept it in the approved document, he said.

“So there’s a real history of deceit here around this issue that has eroded our relationship with the airport,” Davis said. “It’s going to be an uphill battle if there’s any possibility of restoring that.”

San Diego and Salt Lake City were both included in a list of “target cities” for Gateway’s incentives program in a board agenda document approved in February. The document is publicly available online.

Still, Allegiant sent an e-mail survey to Phoenix-area customers Tuesday morning asking for opinions on a possible move to Sky Harbor. If the company does move, it will take about 243 pilot, flight attendant and maintenance crew jobs with it, Davis said.

Although Allegiant says it is engaging in “serious negotiations” with Sky Harbor on a potential move, Phoenix officials said they are aware of no formal talks.

“We have not discussed any specifics with them,” said Deborah Ostreicher, deputy aviation director for Phoenix.

The airport would welcome any airline that wants to fly to Sky Harbor, as long as it has enough space, Ostreicher said. That can depend on number of flights, size of airplanes, ticket counter space and day of the week, she said.

Allegiant spokeswoman Kim Schaefer said the conflicting comments about negotiations may simply be a matter of semantics. The company’s airports manager has met with Phoenix periodically and placed a phone call on Tuesday, she said.

“Things have escalated rather quickly over the last couple of days,” Schaefer said.

But can Allegiant’s low-cost business model really work at Sky Harbor, where landing fees are 72 percent higher than at Gateway?

“We absolutely could operate in that environment,” Schaefer said.

Landing fees represent just one part of the cost of business at an airport, and there are other factors involved like fuel costs, Schaefer said. At Gateway, Allegiant pays for fuel to be trucked in from Sky Harbor, adding to the expense of operating in Mesa, she said.

For their part, Gateway officials have remained diplomatic while addressing Allegiant’s criticism, acknowledging the company’s role in the airport’s success.

Queen Creek Mayor Gail Barney, who serves as chair of the Gateway board, told The Republic Monday that Allegiant is the major reason the airport has succeeded and that it would be a shame if they were to move.

Barney said the subsidies were not created just for Elite Airways, and Allegiant could have received the incentives if it had elected to open the new San Diego and Salt Lake City routes.

Mesa Mayor John Giles, another Gateway board member, said he appreciates Allegiant, which he considers his hometown airline. But the airport has an obligation to the community to grow and expand service, he said.

The board approved the revenue-guarantee subsidy for Elite with a 5-1 vote. Phoenix Councilwoman Thelda Williams cast the lone dissenting vote, though she did not object to the other incentives.

Elite Airways began as a charter service but has recently moved toward scheduled service in some cities. The company flies Bombardier CRJ200 and CRJ700 planes with capacity for 50 and 70 passengers, respectively.

Elite will bring 50 to 100 jobs to the airport with the San Diego service and has near-term plans for expansion. The company remains interested in a Salt Lake City route but will also pursue destinations like Seattle, Vancouver or Mexico, Elite President John Pearsall said.

“We believe that Mesa will be our West Coast base of operations,” Pearsall said. “As we expand with more cities, we’ll be adding personnel, be adding a maintenance base here, adding reservations.”

Once the incentive agreement is over, the airport expects Elite to generate about $100,000 per year in concession revenue, landing fees and terminal fees related to the San Diego route, the report says. At that pace, it would take about six years to recoup the incentive costs.

“What that means to us is that we’re able to offer the destinations that the public is interested in flying to,” Morris said. “That’s exciting for us, because we’re ready for them.”

So wait and see what happens at Meas Gateway….grow or slow…..we don’t know!