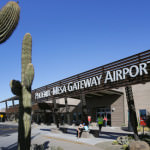 Unlike Mesa’s older west side, where infill projects reign, the southeastern part of the city has huge plots of developable land, including the airport near Ray and Ellsworth roads.

Of the roughly 1,000 vacant acres Gateway has available, about 700 acres likely will be reserved for a future east-side terminal. But airport officials are moving to develop the remaining 350 acres, on the southwestern part of the campus, as soon as possible.

In early June, the airport issued a request for a qualified firm that could act as a partner in developing “Mesa Gateway Airport  Aerospace Park,” envisioned as a hub for aviation, manufacturing and other industrial companies.

“Rarely do you find that large of a tract of land next to a runway, in a major metro area, with a growing population, across from a major research institution (Arizona State University Polytechnic).”

“We’ve had private meetings with many international and domestic companies at this point, and they all seem to say the same thing: ‘What you really need to do is take advantage of the land you have around the airport,’ ” O’Neill said. “It really is a prime location to increase the air cargo and other aviation-related companies coming into the region.”

“Rarely do you find that large of a tract of land next to a runway, in a major metro area, with a growing population, across from a major research institution (Arizona State University Polytechnic),” he said. “It’s really, really well-designed for those industrial-type uses.”

The ideal development team will have experience with airport projects, Federal Aviation Administration guidelines, grants, noise issues, and safety and security protocols, according to airport documents. The park’s city-zoning designation already allows for most manufacturing and industrial uses, as well as taller buildings.

“The more realistic, conservative approach would be to have the developer help us master-plan the location and make sure we have the right land uses in the right places, and bit by bit chew away at those 350 acres,” Joachim said. “But there’s also a small chance we could land a larger project that would absorb all 350 acres in one fell swoop.”