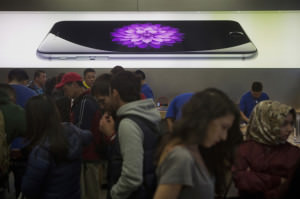 GT Advanced Technologies moved into the plant at Signal Butte and Elliot in Mesa Arizona last year.  They replaced First Solar in that location.  Local Mesa expectation went thru the roof. We were so excited to have a parts supplier for Apple to move into our backyard.  GT Advanced Technologies manufactures synthetic sapphire. When Apple introduced new iPhones last month though, the smartphones didn’t include the material. this was a surprise to many.  Now Gt Advanced Technologies has filed for bankruptcy.  Is that corner cursed???

What will this mean to our local Mesa Arizona economy?  GT Advanced Technologies in Mesa, Arizona, a suburb of Phoenix, had been projected to lead to about 2,000 jobs in construction, engineering and manufacturing. Arizona officials gave Apple and GT Advanced Technologies tax breaks and other incentives to get them to open the facility in the area.

Apple last November signed a deal to make a prepayment of about $578 million to GT Advanced to build furnaces used to make synthetic sapphire. When Apple introduced new iPhones last month though, the smartphones didn’t include the material.

The lack of sapphire in the new iPhones was a surprise to those who had tracked the partnership, and the development exposed that GT Advanced had become overly dependent on Apple, said Pierre Maccagno, an analyst with Dougherty & Co., who recommended investors sell GT Advanced’s stock after the iPhone announcement. While GT Advanced generated $299 million in revenue last year, its sales to Apple in 2015 could have been about $700 million, Maccagno said.

“When Apple announced the iPhone 6, that came as a big surprise that there was no sapphire,” Maccagno said in an interview today. “They are highly dependent on Apple.”

Maccagno said the cost for producing the sapphire material may have been too high for Apple, or GT Advanced may not have been able to produce enough to meet Apple’s needs. Other contractors used to polish the sapphire after it’s made also could have slowed down production, Maccagno said.

GT Advanced, which is set to have its sapphire included in the Apple Watch going on sale in 2015, is due to begin repaying Apple for its loan starting next year.

GT Advanced said it plans to continue operations during reorganization. Bankruptcy “provides us with the opportunity to continue to execute our business plan on a stronger footing, maintain operations of our diversified business and improve our balance sheet,” Chief Executive Officer Tom Gutierrez said in a statement.

GT Advanced listed assets of $1.5 billion and liabilities of $1.3 billion as of June 28, according to a Chapter 11 filing today in U.S. Bankruptcy Court in Manchester, New Hampshire.

The announcement surprised investors who had put money behind the company on optimism about its Apple partnership. GT Advanced’s stock fell 93 percent today to 80 cents.

Apple and Merrimack, New Hampshire-based GT Advanced announced a multi-year supply agreement in November to make a sapphire material that is thought to be sturdier than traditional glass. Making the material requires furnaces to spark a reaction in which cylinders of sapphire grow over about a month, and then the material can be sliced to less than a millimeter thick for use on gadget screens.

Apple touted the deal as a part of its push to boost manufacturing in the U.S. The GT Advanced factory for which Apple offered the prepayment is located in Mesa, Arizona, a suburb of Phoenix, and had been projected to lead to about 2,000 jobs in construction, engineering and manufacturing. Arizona officials gave Apple and GT Advanced tax breaks and other incentives to get them to open the facility in the area.

GT is seeking debtor-in-possession financing to allow it to operate while in bankruptcy, according to the statement.