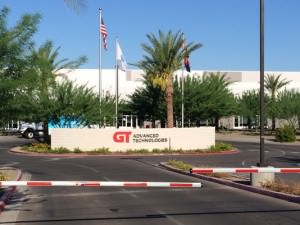 Mesa— A manufacturer of sapphire glass that Apple Inc. uses in iPhones told a bankruptcy court Friday that it wants to shut down a Mesa factory that was once touted as a big job creator for Arizona.

GT Advanced Technologies filed for Chapter 11 bankruptcy protection this week. In a bankruptcy court filing Friday, the company outlined its plans to wind down operations at the Mesa factory by the end of the year along with a second facility in Salem, Massachusetts — a move that would leave hundreds of people out of work.

“This drastic step is necessitated by GTAT’s liquidity crisis and the ongoing cash burn from its operations at these locations,” the company said in a court filing.

The request to wind down operations at the locations is contingent on the court’s approval. GT Advanced Technologies’ stock was down about 35 percent Friday, trading at 84 cents. The stock’s 52-week high is $20.54.

The bankruptcy and ensuing effort to shut down the factory mark surprising turn after state, local and business leaders previously bragged that the plant would be a major boost to the Arizona economy.

Gov. Jan Brewer had hailed Apple’s decision to open the plant in Mesa, calling it a sign that the Arizona’s efforts to provide a pro-business climate were paying off. The state has cut business taxes and created several incentives designed to lure new manufacturing businesses in the past several years.

At full production the companies expected 700 workers to run the plant.

It is a complicated process that will involve keeping dozens of workers on staff to monitor furnaces where the sapphire grows into boules that can sell for $20,000.

Apple currently uses sapphire glass for camera lenses and its fingerprint-reading home button on many new iPhones, and has announced its use on two of three planned models of the iWatch. The Mesa plant fueled speculation that Apple might use sapphire glass in future iPhones, but the newly released iPhone 6 does not use sapphire for its main screen.

Apple has advanced GT $429 million to outfit the plant out of $578 million it agreed to pre-pay when it struck the deal with the company last November. The company also made a bankruptcy court filing Friday that seeks to end the agreements with Apple.

Apple and the city of Mesa did not immediately respond to requests seeking comment. The company said earlier in the week that it is “focused on preserving jobs in Arizona following GT’s surprising decision and we will continue to work with state and local officials as we consider our next steps.”

In a statement, GT said it realizes the difficulties caused by a plant closing but needs to make the right financial decisions following the bankruptcy action.

“While we continue to explore all options with regards to our Mesa and Salem facilities, we recognize and regret the impact that the actions outlined in our bankruptcy court filings of this morning may have on valued GT employees,” the company said.