Fry’s is Under Construction at Mulberry Market Place 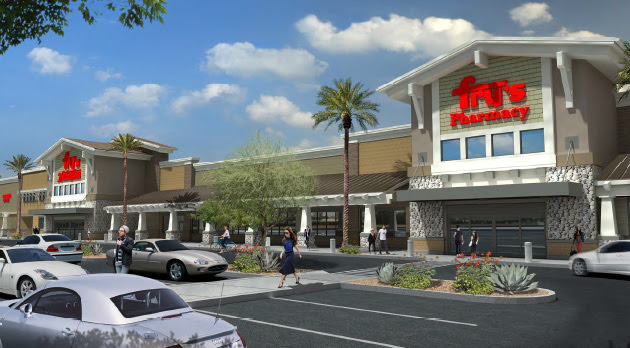 On January 15, 2015, retail developer Brown Group closed on a vacant piece of land at the northwest corner of Guadalupe Road and Signal Butte Road in Mesa, AZ, with plans to build Mulberry Marketplace, to be anchored by Fry’s Food & Drug.

In total, 17.70 acres of land was purchased, with Brown Group partners Gary Brown and Todd Kjar buying 5.30 acres and Fry’s 12.40 acres, in a deal that has been in the works for some 17 months. Mulberry Marketplace will be the third Fry’s-anchored center Brown Group has developed in the last five years. The other two being Fortuna Commons shopping center in Yuma, Arizona, and Sundome Crossing in Sun City West, Arizona.

Work is scheduled to begin in July, including site work, construction of a 123,419-square-feet Fry’s, and 12,000 square feet of shops attached to the south. The site plan calls for 710 parking spaces and a Fry’s Fuel Center consisting of a gas canopy with nine fuel dispensers. Deals are in the works for the three pads available for ground lease. Two of the pads are designed for drive-through restaurants and the third is for a bank.

Named for the nearby Mulberry residential development, Mulberry Marketplace will be filled with the type of service providers typically needed in a neighborhood center. “We hope to satisfy a consumer’s needs in a number of different areas with service tenants and restaurants,” says Brown. “We try to create a nice marketing mix of various tenants who complement one another.”

Plans are to open the center around May 2016, with no word yet on when Fry’s will open. By the time Mulberry Marketplace is complete and open to the public, it’ll have been a three year process.