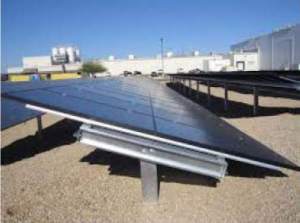 Mesa Arizona has still another development on the horizon.  First Solar is planning a solar research facility in Mesa Arizona.

A $20 million solar-power-generating research and development facility that could employ up to 18 people is to be constructed at 7930 E. Germann Road, Mesa, AZ south of Phoenix-Mesa Gateway Airport.

The Mesa Planning and Zoning Board discussed the First Solar Research Facility at a study session Sept. 16 and approved a site plan, or map, for the development at a meeting Sept. 17. Nick Wood of Snell and Widmer is the applicant and Germann Farms is the owner of the property, according to the meeting agenda.

First Solar has developed, financed, engineered, constructed and operates many of the world’s largest grid-connected photovoltaic power plants, according to its website.

“This is very different project than what we usually have,” Staff Planner Kim Steadman said at the Sept. 16 board study session. “First Solar is proposing a test site for new technologies, so this is not a solar farm for production ­– this is a research and development site,” he said.

First Solar plans to develop the project in three phases, beginning on the north. There will be no buildings, but there will be electrical service, Mr. Steadman said.

Panels and related equipment manufactured by First Solar and its partners will be tested at the 19.2-acre site to cost approximately $20 million, according to a written First Solar report provided to the board. Each phase will establish a test site of about 3.45 to 5.4 acres in size. The installation consists of new fixed tilt, single-axis tracking and dual-axis tracking photovoltaic systems; equipment pads; access roads; and street improvements. The site is expected to produce a maximum of 2.4 megawatts of power upon full build-out, according to the report and accompanying site plan.

Mr. Steadman said the look and landscaping for the First Solar facility was first discussed Sept. 9 by the Mesa Design Review Board.

First Solar officials explained in a written report to the board how a screen wall around the facility will have openings to see the equipment inside. The wall will be constructed of perforated aluminum panels and metal trellises.

“The interesting thing, I think, for people driving by this site is that they have come up with this very appropriate design for their fencing along Germann Road that has this kind of saw-tooth pattern that incorporate landscaping,” Mr. Steadman said.

Board member Steve Ikeda at the study session asked where the infrastructure was for the property and said he was concerned that it was not available for the project.

Mr Steadman said there is industrial/office development just north of the property.

Water and sewer are along 80th Street and the developer will be required to extend them south to Germann Road as part of the development, Mesa Planning Director John Wesley said.

“I did drive by there and what struck me was how far out it was. I don’t have anything against that project. It’s just that, if there is no infrastructure, it’s going to be very costly to do that, I would think,” Mr. Ikeda said at the Sept. 16 study session.

“It is nearby. This particular facility is not going to need any infrastructure because it’s just solar panels hooking up to the electricity,” Mr. Wesley said.