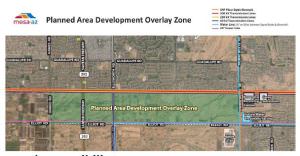 Mesa Arizona is discussing a 1.5-square-mile Elliot Road technology corridor.  “The economic development department has been marketing that site for higher-end employment-type users, particularly trying to get the high-end-technology-type jobs into the area. With that, the need for some type of tool to further track those types of businesses to the area has become important,”Tom Ellsworth, city planner, told the board at the Sept. 16 study session.

Land would not be rezoned outright, but property owners could opt-in to a light-industrial Planned Area Development designation, according to the city of Mesa plan.

The proposed overlay includes design principles and a 150-feet-tall building-height allowance south of the power lines, according to the plan. The installation of high-capacity utilities along Elliot Road, as well as the recent acquisition of the former First Solar facility by Apple Corp., indicates the need and desire for shovel-ready development, according to the plan.

Even before Apple moved to the southwest corner of Elliott and Signal Butte roads, the area had been marketed for employment uses, Tom Ellsworth, city planner, told the board at the Sept. 16 study session.

“The economic development department has been marketing that site for higher-end employment-type users, particularly trying to get the high-end-technology-type jobs into the area. With that, the need for some type of tool to further track those types of businesses to the area has become important,” he said at the study session.

“What this is is an overlay zone; it’s an opt-in overlay zone. What will be established with this overlay is limited-industrial zoning with a PAD overlay,” Mr. Ellsworth said.

Land owners can opt-in to the PAD when the city has a prospective high-tech employer interested in locating there, Kim Lofgreen of the city’s economic development office said Sept. 17, according to a city of Mesa video of the meeting. A developer only needs to submit the necessary paperwork to the planning department for approval, he said.

“The purpose of doing this PAD overlay zone is so that we can expedite the entitlement process and cut entitlement risk so that we can attract high-technology companies to the Elliot Road technology corridor,” Mr. Lofgreen said. “Thus we can create high-quality jobs, high-technology jobs and create investment in the area. Secondly it creates site-planning design guidelines so that we can ensure that there is compliance with the city of Mesa General Plan and the Mesa Gateway Strategic Development Plan,” he said at the meeting, according to the online video. “So this area has been planned for employment uses for about the last 20 years and the area has tremendous assets well-suited and highly desired by high-technology companies,” he said.

“The developer won’t need to go through the rezoning process because we’re going through that right now and the overlay will already be in place so they can take advantage of it,” Mr. Lofgreen said to the board.

“What this does is give the city a great economic development tool in order to attract the type of businesses that Mr. Lofgreen described,” Mr. Ellsworth said at the meeting, according to the online video.

Board member Allen asked at the Sept. 17 meeting why the corridor didn’t extend further south.

“The property to the south, where Apple is existing, you didn’t expand it to include that side?” she asked.

“They do have some special zoning that is in place,” Mr. Lofgreen said.

It falls under the Eastmark Community Plan, which was previously approved, Mr. Ellsworth said.

“This is almost mimicking that same type of approval. When Apple came through, there was a limited amount of entitlement that needed to be done because it had already been done through that community plan,” Mr. Ellsworth said, according to the online video of the meeting. “So really what it is doing is taking the north side of Elliot Road and giving it almost the same advantages as the south side has.”