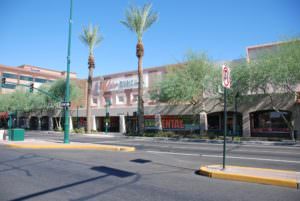 A Mesa native is continuing his efforts to help lure restaurants to Mesa’s Main Street.

Two years ago, Kelly Smith and some of his friends tackled a project they named Project Downtown Mesa.

It came about after Smith, his wife and two other Mesa couples headed out for dinner one evening. They ended up in downtown Gilbert.

“I was disappointed,” Smith said. “I wanted to be in Mesa.”

So, their dinner conversation turned to how they could all help make Mesa—their home—better. It’s not their goal that downtown Mesa become like downtown Gilbert or any other city, Smith said. Rather, he wants Mesa “to be great and be unique.”

Their mission is clear: “getting top-tier new restaurants,” to the city’s Main Street.

He and his supporters want to foster culinary innovation in Mesa.

So, they created a website (dtmesa.org/supporters), did some online marketing, printed business cards, created a Facebook page and compiled “a big email list.” Supporters would drop off business cards at restaurants where they ate asking that the owners consider establishing a restaurant in Mesa.

“The internet allows you to build support around an interest,” Smith said. “This is the first time in history we’ve been able to do this.”

The effort has attracted all sorts of people, he said, from hipsters to seniors and a lot of people around Smith’s age, 35. Downtown developers and property owners are keen on the idea, too.

The business cards “spurred conversations,” Smith said, but so far, no results. They also coordinated a “grassroots, citizen-led initiative” with real estate investors, owners of downtown buildings and restaurateurs for a downtown tour of available buildings. About 150 people participated, he said.

The buy-in from downtown business owners has been varied, Smith said.

“They have been vociferous,” he said. Long-time downtown business owners have “seen it all. We’re still earning their trust, but they opened their doors for the tour.”

Nonetheless, “we haven’t found a taker,” Smith said. He thinks most restaurateurs are afraid to be the first to make the commitment. But, he’s convinced once the first new restaurant arrives, more will follow.

The group has even talked about crowdfunding. Supporters would agree to spend a certain amount of money in a new restaurant, “to pre-pay for your meals.”

Smith repeatedly says he’s not a developer or a real estate agent and claims he has no idea what he’s doing.

“But good things are happening” in spite of that, he points out.

He believes the plan to expand Arizona State University in downtown Mesa with four new multi-story buildings will only help bring more restaurants to the downtown walking corridor.

“We’re thrilled by the ASU proposal. It will make making the case to a restaurant even easier,” he said.

Smith has heard the often-cited claims that Mesa is not hip enough for higher-end restaurants, or that people won’t dine out enough to support a business. He thinks those thoughts are fading, if not already gone.

“There is conversation brewing,” Smith said. “We hope it works to all our advantage.”