Artspace wants to build an affordable-housing project in Mesa 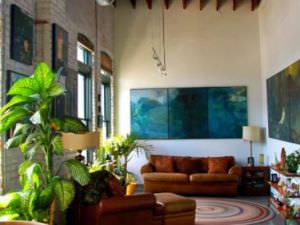 Non-profit developer Artspace wants to build an affordable-housing project for working artists in Mesa.
Downtown Mesa’s light-rail extension, set to open next fall, is driving new development in the area as plans have come forward for a 50-unit artist colony within walking distance of a future station at Mesa Drive.
Non-profit developer Artspace, which has opened 35 artist housing projects in 13 states, plans to open its first Arizona colony near 2nd Avenue and Hibbert within two years.
Artspace communities provide affordable housing for working artists who pass income and background checks. The apartments typically feature high ceilings, large windows, wide doorways and about 100 to 150 square feet of studio space, while the complex includes places for small businesses and community gatherings.
Proximity to the light rail was a major factor in selecting the vacant lot at 155 S. Hibbert, said Heidi Kurtze, vice president of property development for Artspace. Also just two blocks away is the Mesa Arts Center, which the group hopes will provide opportunities for collaboration, she said.
5 artist colonies around the U.S.
Here’s a look at several other artist colonies non-profit developer Artspace has opened in the U.S.
Brookland Artspace Lofts | City: Washington, D.C. | Opened: 2011. | Cost: $13.2 million. | Size: 39 units. (Photo: Photo by: Artspace)
While Mesa’s Planning and Zoning Board on Oct. 15 cast its support for a zoning change to allow the mixed-use concept, the project is also contingent upon a successful application for a low-income housing tax credit program funded by the federal government and administered by the state, Kurtze said.
Artspace plans to apply for the tax credit early next year and could begin construction by fall 2015. The artist colony would likely open a year later.
Anyone who meets income levels can apply to live in the community, but Artspace gives preference to practicing artists who can demonstrate a body of work and passion for their craft, Kurtze said. They are interviewed by an Artspace panel composed of local artists.
Artspace has been pursuing a project in Mesa for about three years following a feasibility study in 2011. The organization asked about 600 local artists, primarily within the East Valley, if they would be interested in an affordable-housing project, and about 250 responded favorably, Kurtze said.
While designs for the project are still being worked out, Kurtze said the community would have a similar feel to one that opened in Elgin, Ill. in 2012. That project cost $15.2 million and included 55 units and about 6,000 square feet of retail space.
“Since it opened it has helped transform that downtown,” Kurtze said. “It was a main street with a bunch of boarded up shops.”
A successful launch of the Mesa project could lead Minneapolis-based Artspace to open additional communities in Arizona, Kurtze said. The organization has talked about building in Tucson, she said.