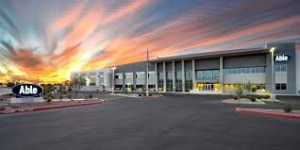 I love to see growth in Mesa. Able Engineering hiring 100 in Mesa is growth. The Phoenix-Mesa Gateway Airport area is growing. This is where I live in Mesa and I see such potential here.  I want to see jobs come to this area to go with the terrific housing we have here.

CEO Lee Benson’s aerospace parts supplier also wants to add 50,000 square feet to its Mesa Gateway footprint as part of the company’s growth. The expansion will be facilitated by a new $5 million bond issuance by the the Phoenix-Mesa Gateway Airport Authority.

Able’s headquarters and operations base are at the East Valley airport, which is owned by several Valley cities – including Mesa – and the Gila River Indian Community.

Able landed at the East Valley airport in 2012 via an $18 million bond issuance from the Airport Authority.

The city of Mesa then leased the 191,000-square-foot Able building from the airport and aerospace supplier subleased the property from the city, said to Scot Rigby, senior economic development manager for Mesa.

That deal and the expansion proposal allows Benson to spend money on growth and building the company.

“It is a win for the airport, the city of Mesa, our employees, our company and our customers,” Benson said. Benson and former General Electric CEO Jack Welch partner on another venture, Execute to Win – a cloud-based employee evaluation system.


Able was obliged to have at least 250 employees under the bonding deal with the city and airport.

The company has exceeded that requirement by 200 workers with plans for more.

The Mesa City Council and Gateway Airport Authority will consider the expansion and bond plan next year.

“Able Engineering is a major success story in Mesa and the potential for the business to grow is amazing,” Mesa Mayor and Phoenix-Mesa Gateway Airport Authority Board Member John Giles said. “I am confident we will see Able continue to expand and create hundreds of new jobs.”