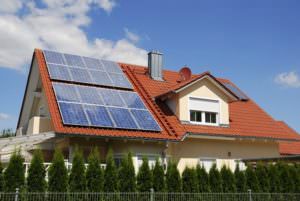 I am a fan of passive solar design.  Solar panels I am not sure about.   Great concept but does solar really financially make sense?  This article by  Jeremy Cook is a great overview  of the pluses and minuses.

Solar panels have long been touted as the future of green energy. If they’re not financially beneficial, however, some people simply won’t install them, no matter how eco-friendly they may be. The good news is that the price of solar panels has dropped dramatically, from $101 per watt in 1975 to just $.61 in 2015.

Though this represents a dramatic cost reduction, the price of these cells isn’t the only thing a homeowner hoping to save money on electricity bills would need to pay for. There is also the cost of installation as well as equipment, including a power inverter to transform the DC power generated by the panels into AC power usable by the majority of appliances, and possibly a battery system for when the sun isn’t shining. When all is said and done, solar costs—per 2012 data—will run around $4.44 per installed watt for a system connected to the existing power grid.

Power consumption is generally measured in kilowatt-hours (kWh), or 1,000 watts of power applied over an hour’s time. At $4.44 per watt, this gives us a price of $4,440 per installed kilowatt capacity. If you’re getting full power for 12 hours a day—a very generous assumption—then $4,440 would give you 12 kWh of energy per day.

Fortunately this is enough power to run six traditional, incandescent 100-watt light bulbs for 24 hours. If you’re using newer LED bulbs that require fewer than 10 watts to operate, you could theoretically fill your house with light from 60 or more bulbs using only the sun’s power (though you would need a storage system to run your system at night, meaning more equipment costs).

While this might all sound impressive, the average cost of power in the United States is 12.5 cents per kWh, meaning the same amount of power would cost only $1.50 if purchased from the power grid. Still, the savings from solar panels would add up to $547.50 per year, which begins to sound more significant. In fact, that works out to a payback period of 8.1 years—perhaps the tipping point at which solar panels become viable for the average consumer.

Keep in mind, however, that 12 hours of peak power per day isn’t likely. How much sun your area gets varies significantly, with the best US locations concentrated in the Southwest, Hawaii and, to a lesser extent Southeastern states like Florida and Georgia. Sunlight availability will also vary by season, as will the weather.

For a more accurate estimate in your area, Solar Estimate can calculate a payback period for your personal situation, taking into account any rebates or other incentives available. And know that the price of power tends to increase, at least in nominal terms. Depending on what happens, you could save more money in the future than you anticipated.

Even if your system could pay for itself in eight years, you’ll be losing money if you move out in four. It’s estimated that most Americans stay in their homes for about 13 years before selling, but that number is highly variable. ( My sources say people move more often than that.)

If you do decide to move before the system pays for itself, the good news is that solar panels can increase your home’s value. The bad news is that how much it increases—or even decreases in some cases—is dependent on many factors. In areas where people tend to be concerned about the environment and can afford the extra costs of a solar panel system, you could recoup much of the money that you invested. In areas where people tend to be less concerned about the environment, and more concerned about making sure their basic needs are met, you might not see much of an increase in the selling price of your home.

In other words, if most of your neighbors drive Toyota Priuses, or better yet Teslas, solar panels might be a good idea. If most of them drive large SUVs or trucks, you may have more trouble selling your house. Perhaps in areas like the latter, the best way to get solar panels on your house is to simply buy one with them already installed. Instant power savings at a potentially huge discount with no installers interrupting your life!

Installing panels can also lead to maintenance costs as well, such as roof work and repairing or upgrading the solar panel system itself. In fact, you would be wise to install solar panels on a newer roof, or even to coordinate the two jobs together.

A major benefit of these systems is that they help smooth out any interruptions in power from the grid, especially if you’ve installed an energy storage system. In areas prone to hurricanes or other sources of power interruption, this could be extremely helpful as the panels work as a substitute for a backup generator.

Me again.  The other option is renting panels and various loan programs. This can really cause problems if you need to sell before the system is paid for.  Beware of this idea.  Do your research.

So Is It Worth It?

The answer is a frustrating, “It depends.” The case for solar can be made, especially if you intend to stay in your house for at least 10 years. On the other hand, if you don’t live in one place for very long, the benefits can be nonexistent or turn into negatives. In which case you might consider other power-saving options, such as more efficient lighting or appliances.