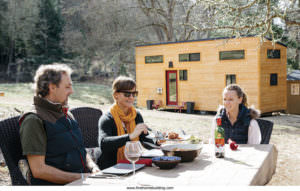 Who watches HGTV Tiny houses. Who wants tiny houses made legal?  Me too!!!  This article address the current status of tiny houses…by By Andrew Morrison Nov 02, 2016.  Great info!!


The popularity of tiny houses has continued to expand in recent years. As more and more people build or purchase tiny houses, the inevitability of code compliance — or in this case, the lack thereof — has come into focus. As things stand today, there is no way to build an IRC-compliant tiny house because of challenges such as ceiling heights, use of sleeping lofts, trailers as part of a foundation system, emergency-egress requirements, and loft-access parameters.

Many in the tiny-house community believe proper oversight is essential to the construction of safe tiny houses, especially with the large owner/builder segment. Further, those of us choosing to live full-time in our tiny houses want to receive a certificate of occupancy; however, there are not any current means to achieve this because of the lack of codes specific to tiny houses. We are at a major crossroads in the industry.

As a means of moving the industry forward, I recently wrote a tiny-house code appendix for consideration in the 2018 IRC. That appendix was accepted for review as a public comment during the International Code Council (ICC) public comment hearings in Kansas City, Mo., this past October. A team of tiny-house advocates attended those hearings and spoke in support of the proposal, as did a large number of building officials present at the hearings.

The tiny-house appendix was approved through two stages of the process during the hearings and now moves on to the third and final stage of approval. If approved during the final vote (which takes place electronically for voting ICC members November 8–21, 2016), the appendix would address most of the issues currently facing tiny houses and would provide a national code to which all tiny houses could be built.

I have already heard from several building departments that plan to use the appendix as is, regardless of whether it is approved for inclusion within the 2018 code. They see the value it brings to the conversation and see that it addresses major issues in the industry. As such, the appendix and the votes in favor to date have already had a positive impact on the tiny-house industry. Should the appendix be approved, it would become available for adoption in the 2018 IRC. Jurisdictions could amend it to create stricter standards as necessary for their specific region(s), or they could adopt it as written.

Here’s how you can help make tiny houses legal. Visit TinyHouseBuild.com and learn exactly what our plan of action is for contacting building departments and fire marshals around the country. We are making a professional, on topic, polite, and dedicated push to connect with as many voting ICC members as we can before the start of the voting period on November 8. You can view the appendix on that site as well to familiarize yourself with the details. We’ve even created a letter, also available on the site, that you can send to your officials urging them to support the appendix. With your help, we can make tiny houses legal and help create healthy, safe, and attainable housing for those not always included in the ranks of homeownership.