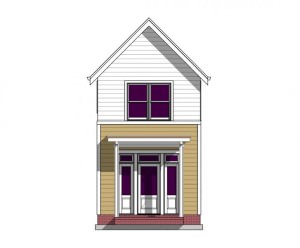 There may be demand for starter homes, but many home builders aren’t interested in building them. Entry-level new homes are becoming scarce, and are unlikely to see any rises in the future, according to a BUILDER Online article.

“Entry-level refers to a price-brand at the lowest end of the home price spectrum; a true entry-level home lowers the barrier to entry to home ownership, typically for a renter to move into a home he or she owns,” the article states.

Here’s why the starter home is losing traction among those in the building industry:

The “starter” home may be moving to extinction. The idea of a home purchase that serves as the first step before buying a more permanent family residence may be fading as more entry level buyers start to favor stepping into their permanent residence from the start.  Is that realistic? What is the market doing to help these entry level buyers..

Not much.  A decline among inventories for entry-level homes has worsened during the past year as discount foreclosures have faded and investors have continued to buy up low-priced homes and turn them into rentals through all-cash deals. Also hampering the inventory picture, lower-priced properties are more likely to have home owners with underwater mortgages, preventing them from moving on and putting their homes on the market, Reuters reports.

“It’s bad news for people looking for a starter home that all the choices are disappearing,” says Lawrence Yun, chief economist at the National Association of REALTORS®. “People shouldn’t expect inventory to show up on the low end. It’s not available.”

The number of homes for sale below $198,000, considered the bottom third of the market, dropped 17 percent in June compared to a year earlier, according to an analysis by the real estate brokerage Redfin, which tracked 31 of the largest U.S. metro markets. On the other hand, inventories rose 3 percent in the middle of the market and soared 15 percent at the top, according to the analysis.

The trend is even more evident in certain markets. For example, in Denver, entry-level listings in June fell 51 percent from a year earlier, while the supply of higher-priced listings was up 4 percent. In Austin, Texas, inventories at entry-level prices dropped 34 percent in June while soaring 14 percent in the top third of the market.

“There is inventory coming on line, albeit slowly,” says Nela Richardson, chief economist for Redfin, a Seattle-based brokerage. “The problem is it’s not equally distributed. There is more turnover at the higher end. At the more affordable end of the spectrum, people are stuck.”

What’s more, due to the high demand and limited choices, average list prices on the lower end are rising, jumping 15 percent in June from a year earlier, Redfin reports.

The limited supply has prompted more buyers in the lower-end price range to adjust their expectations, says Sharlene Hensrud, a real estate professional with RE/MAX Results in Plymouth, Minn. For example, she says her recent clients were touring homes in the $140,000 range and was unhappy that would only buy them a one-bedroom, one-bathroom house with no garage. A few years prior, that price would have gotten them a three-bedroom home, Hensrud says.

First-time home buyers are often drawn to the lower-priced homes, and their dwindling numbers in recent years have reflected some of the struggles in finding an affordable home. First-time home buyers accounted for 28 percent of all sales of previously owned homes in June, which is down from a historical average of about 40 percent, according to NAR research.

Home builders say they hope to meet the demand of entry-level homes, but it’s going to take some time until they can play catch-up.

After all, the supply of cheaper new homes “isn’t there because young people are still up against these financial barriers,” says David Crowe, chief economist for the National Association of Homebuilders. “The builders are responding to the customer that is active in the market. It will be at least two years before there is a measurable change in the share of sales going to first-time home buyers.”

Earlier this year, representatives from the nation’s largest home builder, D.R. Horton, said they were moving into capturing more of the entry-level market with its newly launched brand called Express Homes. The properties will be priced between $120,000 and $150,000 and will be concentrated in Texas, Georgia, and Florida. So maybe a move is in order.