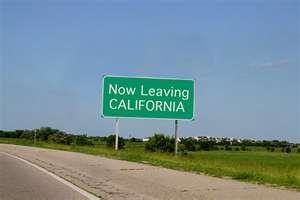 One couple wanted to stay in the area but couldn’t find a house they both liked and could reasonably afford — despite a dual income of around $150,000.  Sounds like a healthy income to me.

So they decided to go inland — all the way to Arizona, where they recently opened escrow on a $240,000, four-bedroom house with a pool just outside Phoenix. Their monthly mortgage payment will be about $500 less than what they paid for a two-bedroom apartment in the Orange County beach community.

“The only hesitation was [leaving] the great weather,”

Moves out of the area remain far below levels seen during last decade’s housing bubble, when out-migration was nearly triple what it was in 2016 — and real estate agents urged clients to “drive until you qualify.”

But after slowing down in the aftermath of the Great Recession, which devastated the housing market, out-migration is picking up as prices climb steadily higher, according to U.S. Census Bureau data.

To escape high prices, people — often younger and with lower- or middle-class incomes — are looking toward the Inland Empire and nearby states for additional square footage and a lower mortgage payment.  It is just too expensive to live in California.

“[Migration] is settling back into longer-term patterns,” said Jed Kolko, chief economist with employment website Indeed.com who analyzed the data.

Others were more blunt.

“The impact is to create an auction situation between the haves and the have-nots,” Christopher Thornberg, founding partner of Beacon Economics, said of the housing shortage. “And the have-nots have to move away.”

In 2016, about 75,000 more people left Los Angeles County than moved here from other places in the United States, the data show. That rate of “negative domestic migration” is 21% more than a year earlier, and nearly double the level seen in 2012 when moves away from the county had bottomed out.

A similar trend exists in Orange County, where the median hom price of $645,000 is higher than the peak last decade, a level not yet hit in L.A. County.

Detailed data on who moved and where is not available yet for 2016, but it is for previous years.

“People still want to be here,” said Jordan Levine, an economist with the California Assn. of Realtors, who compiled the age and income data. “It’s just a question if you can afford to be here. Higher-income people and those with more education have a better shot, but even they are struggling.”

The population in Los Angeles and Orange counties is still growing, a result of births and immigration from other countries. Jobs are on the rise too.

But as young people leave, some businesses and economists are becoming concerned.

“How do we grow our economy when we can’t recruit the workers who can come here and have a decent quality of life?” Levine said.

Rob Lapsley, president of the California Business Roundtable, a senior executives group, said housing has “quickly risen to the top of issues impacting decisions in the boardroom.”

Businesses are struggling to recruit and some are putting off expansions, Lapsley said, while others are moving mid-level office jobs to neighboring states.

“They are moving folks in order to provide a better quality of life,” he said, noting employees will also take a lower salary in a less-expensive state. “It’s a win-win.”

At Ytel, a software company in the Lake Forest neighborhood of Foothill Ranch, some employees commute an hour each way to work, unable to afford a house in a city with a median price of $727,000.

“It’s highly inefficient,” founder and Chief Executive Nick Newsom said. “After a long commute it can take time to realign your focus to the workday.”

To help, Newsom said he lets employees work from home and use video conferencing. Or they can work flexible hours so they can drive in after rush hour.

“In my dream world, I would want my employees to have homes close to the office,” he said. But “it’s difficult for them to do and you’ve got to make a very good [salary] to live in south Orange County.”

It’s a problem that extends beyond Southern California.

Whatever your home size goal you can get more house and better communities in the Phoenix area.  You can find the home of your dreams here. Phoenix is affordable.